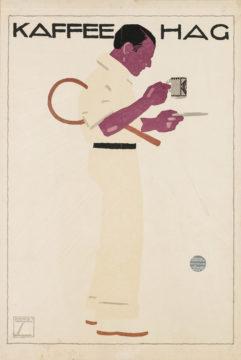 Ludwig Hohlwein (1874–1949) was one of the most prominent German poster designers in the first decades of the twentieth century. Typical of his compositions are full-length figures depicted in a simplified style and yet conveying in their posture and clothing a precise social standing. His advertising for Kaffee Hag exemplifies this visual strategy.

A man in elegant tennis wear, his racket casually clasped under his right arm, treats himself to a coffee break. His distinctive profile and smart hairstyle identify his social milieu, as do his clothing and the leisure sport he is evidently engaging in. Ludwig Hohlwein, who had lived in Munich since 1906 and obtained his first commissions almost by chance, soon proved to be a gifted poster designer. His figures dominate the picture space, and he eschews superfluous details. Hohlwein assured in this way the long-distance impact so crucial to the medium. His coffee drinker does not materialize from outlines but rather from patches of color set against each other. Also unusual in Hohlwein’s work are his extremely delicate color schemes, as manifested here in the man’s skin color and his outfit, which only subtly differs in tone from the background. While Hohlwein’s contemporary Lucian Bernhard (1883–1972) placed the product squarely in the foreground in his object posters, refraining from depicting the consumer, Hohlwein made his figures stand for a certain lifestyle. In addition to the depicted representatives of this lifestyle, dark-skinned servants might also be used to illustrate the privileges of status. The cup the tennis player is holding displays part of the Kaffee Hag logo, and the artist also always found a place for his own signature, a logo with his name and his place of work, Munich, on each of his posters. His trademark was umlaut dots rendered as elongated diagonal strokes. (Bettina Richter)