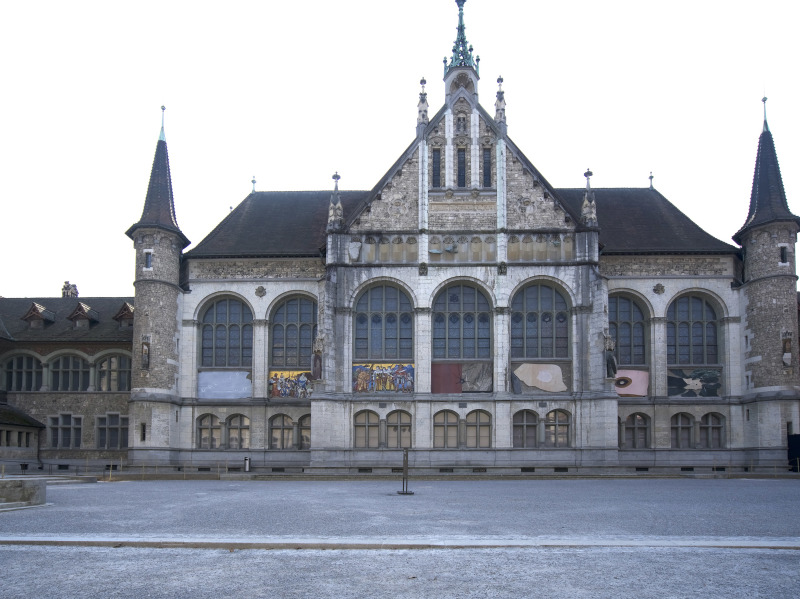 You are now in the interior courtyard of the National Museum, the last stop on this walk. As we have done all along, we are going to talk about the historical aspects, not the modern ones. So we are not looking at the 21st century extension, but at the old, 19th century, part of the museum. It was designed by Gustav Gull, the Zurich city architect, who based his ideas for the National Museum on late Gothic and Renaissance buildings, which was typical of that time. The National Museum was completed in 1898 and ceremonially inaugurated. Construction work had been preceded by a competition between several Swiss towns which had put themselves forward as the site for a National Museum.
The imposing tower is actually a copy of Baden’s city tower. As an example of Late Gothic it was an ideal source of inspiration for Gull. To the left of it, between the tower and the new building – and behind the tower as well – are the wings of the former Kunstgewerbeschule and of the Gewerbemuseum. As we saw at the beginning of the walk, these moved to a new building in the 1930s, what is now the Museum für Gestaltung.
So that is the link between the National Museum and the Museum für Gestaltung. Both are worth a visit. But since you are now here… why not go inside? We hope you enjoyed the walk and that you’ll enjoy your visit to the museum too.