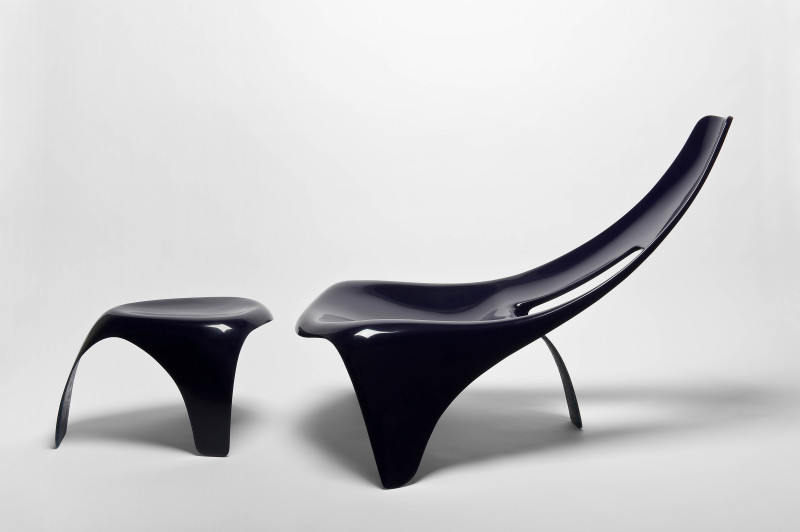 The architect and visionary Werner Müller (1924–1995) closely studied people’s sitting habits, resulting in the development of the Relaxer, a lounge chair with a molded polyester surface. A section cut out of the backrest is folded down to support what looks like a manta ray balancing on its two fins.

Werner Müller, who is also known as “Seepark-Müller” or by his pseudonym W. M. Anderwerd, was an architect, designer, inventor, and journalist. He studied architecture at ETH Zürich, with additional training in landscape architecture. In 1956, he quickly made a name for himself with his building project for the Lake Zurich basin. A more reduced 1974 version of the project, which originally included a car-free park and various superstructures, was, however, defeated in a referendum, as was Müller’s plan for the Summer Olympic Games in Zurich. Apart from his ideas for the use of technological innovations in urban planning, such as the Compact-Bahn, an urban monorail (1973), Müller made his mark with his fountain pen for the blind, cubed milk, and nonslip underwear. His furniture is less well known but is similarly characterized by an uncompromising attitude. Müller describes the Relaxer as the deck chair’s domesticated brother, allowing lounging to be relocated from the terrace or balcony indoors. His goal was to improve the ergonomics of the resting position—the transitional stage between sitting and reclining—for although people spend much of their time sitting down, they often do it incorrectly. Despite being molded, the three-legged chairs seem as though they were cut and formed from a single surface. The lounge chair and accompanying footstool were produced in small series in the color variations red, blue-violet, and white. They were sold by Wohnbedarf and Jürg Bally, and were used in various settings, including an indoor swimming pool in Zurich. (Renate Menzi)