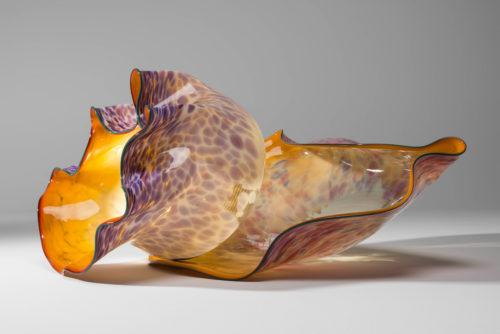 The North American glass artist Dale Chihuly (b. 1941) pushes the boundaries of the material of glass in his colorful works, taking inspiration from both folk culture and the natural world to create captivating pieces

Dale Chihuly’s Orange and Mauve Macchia Pair, conceived as a two-part object, was made possible—like all of the artist’s large-format works—by his consummate knowledge of the material and his professional mastery of the corresponding techniques. By melting multiple layers of colorful glass shards into the colorless glass gather and then laying on glass threads, Chihuly and his experienced team of glassblowers were able to achieve the desired ornamentation of the outer shell. The underlayer in yellow-orange provided the right shade inside the shell. Once the surface had been executed, the huge glass balls were cut open with scissors and, taking advantage of the force of gravity, were swung into the meandering lines of the final form. The partial collapse of the walls was achieved through a knowledge of how the molten glass behaves when cooling and solidifying. After originally studying interior design, Chihuly has been actively pursuing glassblowing since 1965. During a stay in Murano in 1968, he worked with Venini, gathering his first experience collaborating with a team. To date, Chihuly has produced as a glassblower and designer more than a dozen spectacular series, dazzling the public with his room-filling installations. He regularly gives lectures and presentations to pass on his inspiration and wealth of knowledge, while the Pilchuck Glass School he cofounded in Seattle in 1971 offers professional training. (Sabine Flaschberger)