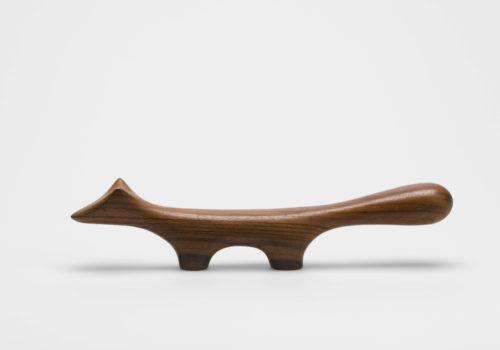 At first, Antonio Vitali (1909–2008) carved wooden toys for his own children, but then the trained sculptor decided to go into business on his own, crafting highly simplified, elegant animal forms in his workshop. Distributed internationally, the toys stood out from their conventional counterparts by virtue of their pared-down design and sculptural quality.

After training as a sculptor in Zurich and Paris, Antonio Vitali became a father at the young age of twenty-three and then, shortly after the birth of his second child, a widower. During these years of crisis, he eked out a living as a photojournalist, but then war broke out. Vitali went into active duty, married again, and by 1942 had four children. Because money was always tight, he made his own furniture for the family and carved simple wooden animals as toys for his children. Watching them at play, he realized that rather than needing naturalistic depictions they were capable of seeing animals or other objects in randomly shaped pieces of scrap wood. This experience, as well as the influence of Rudolf Steiner’s anthroposophy, encouraged him to pursue a path toward formal abstraction. He opened his own workshop in 1944. Johannes Itten exhibited Vitali’s toys at the Kunstgewerbemuseum Zürich in 1951. Max Bill described them in his book Form: “This toy roe-deer is so admirably delineated that it is really a perfect little piece of sculpture. The graining of the wood emphasizes its formal expression, which is not only aesthetically right but also adapted to the size of a child’s hand.” Vitali toys also made a name for themselves in the United States. To meet the growing demand, Vitali tried using carving machines. However, as simple as the sculptural forms may appear, they could not be produced in the same high quality by machine and had to be individually hand-finished by someone with the requisite skill. (Renate Menzi)

After an artistic education in Zurich and Paris, sculptor Antonio Vitali (1909–2008) began to make wooden toys. The anthroposophically inspired, abstracted animal forms attracted interest, prompting Vitali to open a workshop in Zurich in 1944. He first supplied toys to Franz Carl Weber, and in 1954 began cooperating with the New York manufacturer Creative Playthings. In Switzerland, Vitali ran workshops in Thalwil and Sornico, and in Germany from 1968 to 1975 for the Otto Maier Verlag in Ravensburg. Vitali donated his entire archive to the Museum für Gestaltung in 1992.