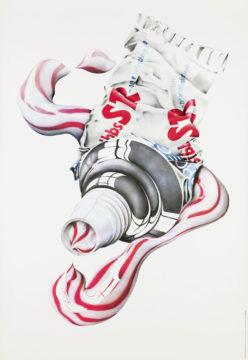 The toothpaste tube is not rolled up neatly from the bottom. Instead, it’s been pressed so often in the middle that the contents are oozing out the splitting sides. The metallic sheen of the tube competes with the glints on the soft toothpaste. With this poster, the British graphic designer, artist, and musician Michael English (1941–2009) made a mundane tube of toothpaste the star of the show.

Michael English was one of the leading artists of the Swinging Sixties in England. He knew how to combine contemporary influences with stylistic elements from Art Nouveau, Japanese art, and Surrealism to striking effect. His art exerted a vital influence on the rebellious youth counterculture of the late sixties. Just as legendary as his posters for Pink Floyd and Jimi Hendrix (1942–1970) were his Pop Art posters. With the democratization of consumption in the early sixties and the rise of products sharing the same price and quality, the efforts by the proponents of the object poster to elevate standard goods to the status of unique objects of interest lost its credibility. The fascination of the fresh and unspent could no longer compensate for the lack of a one-of-a-kind aura. Soon thereafter, however, Pop Art artists would discover how to invest everyday objects with visual weight, while at the same time debunking them as mere disposable items. As damaged goods, they once again told a personal story. Symbolically charged but reduced in its formal aesthetic, the toothpaste tube assumes a magical presence and entices us to take a fresh look at something we see every day. The red-and-white squiggles, echoing the beauty ideal of red lips against white teeth, are imbued with a whimsical eroticism. By making the mass medium of the poster his own, English negated the traditional boundaries between high art and everyday culture. (Bettina Richter)

Michael English (1941–2009) was one of the leading artists of the Swinging Sixties in England. His art had a major influence on the rebellious youth counterculture late in the decade. English’s Pop Art posters are legendary. In them, he underlines the visual impact of trivial everyday objects while at the same time debunking them as mere disposable products. By making the mass medium of the poster his own, English negated the traditional boundaries between high art and everyday culture.