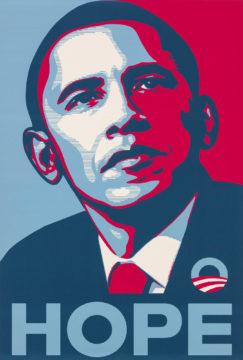 With the iconic Hope poster that Frank Shepard Fairey (b. 1970) first created on his own initiative and distributed independently of Barack Obama’s official election campaign, the graphic artist attained worldwide fame. In Pop Art style, the poster compellingly visualizes the oversized hopes invested in Obama’s candidacy.

Known as a street artist and well-versed in guerilla marketing, Frank Shepard Fairey first attracted widespread attention with his Obey Giant sticker campaign in the 1990s. For his Obama poster, he used the national colors red, white, and blue, taking his cue from official US election posters. The model for his stencil portrait of Obama was a 2006 photograph Mannie Garcia took for the Associated Press that had been making its way through the internet. This borrowing resulted in a copyright dispute between Fairey and the news agency that went on for several years. Variations on the poster sporting the words “Progress” or “Change” were also circulated. In addition to the way it embodies the popular economy of image and text message, Fairey’s poster is fascinating for how it stylized a presidential candidate as an idol even before his election. Obama is shown here as a visionary. Instead of looking out at the viewer, his eyes gaze upward into higher spheres as he faces up to the grand mission of tackling the challenges ahead. This pictorial rhetoric led to Fairey’s poster being rapidly integrated into the official election campaign. The motif could soon be found on T-shirts, coffee mugs, and other promotional items. It was also widely copied, imitated, and varied, which was, after all, Fairey’s intention. In January 2009, immediately after Obama’s election victory, the National Portrait Gallery of the Smithsonian Institution acquired the poster for its collection, thus according it museum status. (Bettina Richter)

Campaign posters draw on proven historical formulas. The smiling faces of George Bush Senior and Ronald Reagan promise security and try to inspire trust. The famous poster Hope shows Barack Obama with a visionary gaze in the style of a pop icon. Bernie Sanders is depicted only as a silhouette, quoting a poster portrait of Bob Dylan. The texts, too, speak for themselves: the intimate use of first name only turns a presidential candidate into a close friend, while the word “Hope” conveys a universal promise.